Day of Prayer For Britain
26 January 2019
The SSE Arena, Wembly

'Through Faith subdued kingdoms, ruled with righteousness, and received what God had promised' (Hebrews 11:33)

Call unto Me, and I will answer thee, and show thee great and mighty things, which thou knowest not. (Jeremiah 33:3, KJV)
Dear Prayer Partner,

This may be the most important letter I have ever written!
I have just returned from my 3 days of prayer in Athens! I used to take tourists there and visit Mars Hill before my time in a communist prison. Even after my release, I went several times to evangelise and saw some amazing miracles of healing. Yes, I had a wonderful time of prayer with the Lord, seeking His blessing on the Day of Prayer in Wembley, but, reflecting on my film the Rape of Europe, I saw a whole new significance in Brexit, from a Biblical perspective! I shall share something of this in Wembley!

Time is short – the situation critical, both for the fulfilment of prophecy and the imminent Return of Christ – and Brexit, which is part of end-time prophecy! As I write this, Theresa May is calling for discussion over her Brexit proposal and a final vote on Tuesday 15th to decide the future for our nation! But because the EU has offered no changes, she cannot win the vote – and will probably delay this vote again until the last minute! This leaves us in a difficult position, for which not one of the main political parties has a solution. I believe with all my heart that God has the real answer – but because the majority of the nation does not have a firm faith in God, this brings an awesome responsibility to those of us who do! I believe in the power of a God who is greater than men, and the ultimate power you and I have to change events through the power of prayer.

But look at Hebrews 11, Paul’s teaching on faith and, as I write this, the Holy Spirit is showing me from vv 32-40, Gideon, Barak, Samson, David, Samuel, and the prophets, who through faith conquered kingdoms, shut the mouths of lions, quenched the power of fire, whose weakness was turned to strength and routed foreign armies. I believe that if we PRAY with FAITH, we can do the same today! You and I will do this together – even routing foreign armies! This is my vision for Wembley – coming back from Athens and Mars Hill – you see why I went there!

For too long ungodly government decisions have been decided by a minority. Now is the time for us as Bible Believing Christians to take action and have a voice in the future of our nation! This is a call for us to unite as Christians – forget our differences and call upon God to determine the future of Great Britain! The politicians have failed us over the last two and a half years – now is the time for God to act!

Either we need a Moses to deliver us out of Egypt – or even more dramatically – an Elijah to confound the prophets of Baal and call down Fire from Heaven. But in Elijah’s day, that Fire from Heaven fell on the altar! This is why we desperately need our Day of Prayer and fasting in Wembley – to raise that altar for God to act, literally it needs a miracle, and only God works miracles, to save this nation! 2 Chronicles 7:14 is clear, ‘If My people…’

But I will be leading this significant Day of Prayer – believing that each one of the previous Days we have held has stepped up to a higher level – September 8th 2018 changed my life forever! But Wembley on January 26th will take us to a level even higher still – until the Glory of God comes down to our nation!

I urge you to book as soon as possible, you can choose where you wish to sit! So book now and you will not be at the back of the balcony!! I called this National Day and, in answer to my desperate prayers, the barriers are breaking down we are being joined by many other groups. God has begun to move – and I shall pray that new Holy Ghost Fire will fall on this nation so that, as we unite in repentance, a greater move than the Welsh Revival shall change the hearts of this Nation.

I have a vision – for you and for this nation. When I received the Holy Spirit in 1946, I obeyed the Scripture where Paul says ‘covet the best gifts’. I didn’t ask for miracles or even healings, I asked for the gift of Holy Spirit Faith, because this has governed my whole life since. I want to live Hebrews 11:32-40 now!

In addition to Praying for Britain we have a comprehensive programme of evangelism for 2019: Ukraine – Russia – Armenia – Lithuania – Israel. I am, first and last, an evangelist!

If My people will humble themselves and pray 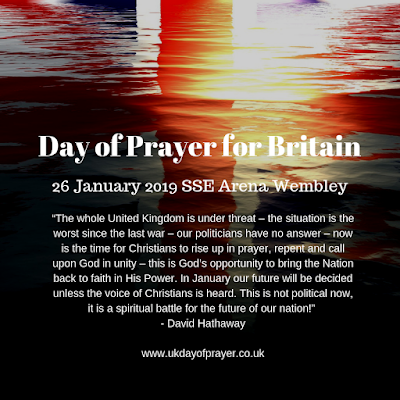 Day of Prayer for Britain

Join thousands of believers for a Day of Prayer for Britain on Saturday 26 January 2019, The SSE Arena, Wembley.

Email ThisBlogThis!Share to TwitterShare to FacebookShare to Pinterest
Labels: brexit, church, fasting and prayer, forgiveness, Pray for Theresa May, pray for UK, prayers for the nation, righteousness and justice, transformation