Prayer Guidelines for 6 th of August 2019 by Alan Crook

Prayers will be used when over 40 people will meet in the morning to pray foe Britain.
Lets join together with them and pray for Britain.

Ephesians Proverbs 29:18 Where there is no vision, people cast off restraint; but blessed is the one who heeds wisdom’s instruction.

1 Peter 5:10 And the God of all grace, who called you to his eternal glory in Christ, after you have suffered a little while, will himself restore you and make you strong, firm and steadfast.

In the first words of the bible we see that God has the power to both create and re-create. Where human ingenuity fails in both vision and ability, God has the power to restore both our vision and our destiny to that which He would have us to be. Not only us as individuals, but also, us as a nation. However, we have a part to play. We are obliged to seek and ask and knock. And to continue to do so until the job is done. This episode of our nation has not yet reached the end of page one.

The first nation to congratulate B.J. on his election was Israel. B.J. has declared that he is a friend of Israel and that
wild horses couldn’t stop him from being the first prime minister to visit Israel in a long time. If anyone doubts that God blesses those who bless His people, then let them take notice how God is inspiring this man. Now our task is to
Pray for him to be give his heart to Jesus.
Pray that he to seek Godly authority and Godly direction.
Pray for his Cabinet There is great rejoicing that all the team is behind him and that the majority are pro Brexit. His cabinet members are all pro brexit. Now that we have prayed them in, let’s pray them on. Make no mistake, it is our obligation to pray for each person regularly.

Chancellor of the Exchequer is Rt Hon Sajid Javid MP.

He is 50 years old, A real Wizz kid with finance and a very cunning politician. He studied both politics and economics at Exeter and is far more capable than his predecessor. He is a fighter of the greatest renown and has served in many key positions in the government, including foreign secretary, business affairs minister, economic secretary, and minister for cultural affairs, all this from a man who has only been an MP for eight and half years. You can't get a better pedigree than the one this man has. Along with this he is Pro No Deal Brexit, Pro leave, Pro Israel and pro B.J. He was the first man to stand up and fight against the anti-Semitism of J.C. He was the one who called for J.C. to give account of his stand on anti-Semitism. He exposed a huge Asian paedophile organisation. He was denied the chance to sit for his g.c.s.e. in maths so he worked to pay for his tuition.

He is not a muslim, His wife is a born-again Christian. He has declared that the only religion practised in his home is Christianity. He was born in Rochdale the birthplace of the co-op. He suffered terrible bullying at school and has done all that he can to stand against bullying. I could comfortably fill two pages with this man’s achievements. You may find this a slight bias, but you can’t possibly get a man more qualified than this man Pray for him
Foreign Secretary is Rt Hon Dominic Raab MP 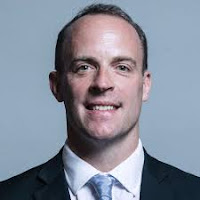 He is 45 years old, Another high flier who has held several key positions in parliament. Like B.J. and Sajid Javid, he too is pro-Israel. This man is no lightweight and in years to come he could well be prime minister. His career is mainly geared to his background as a solicitor. He has held no less than 8 positions in public office, including, Parliamentary Under-Secretary (Ministry of Justice), Minister of State (Ministry of Justice), Minister of State (Housing, Communities and Local Government), Secretary of State for Exiting the European Union, now Foreign Secretary and First
Secretary of State. All this in a period of 9 years. He does come with a health warning however; his name was hijacked in a smear
campaign that linked him with a sex ring. Subsequently the newspaper that raised the matter profoundly apologised and payed damages which were said to be commensurate with his position. He has always advocated a No Deal Brexit stance in fact it is
said that his was the principal in the first place. He has written several articles and books on legality and justice and is an advocate of Civil liberties, meritocracy, business competitiveness, and foreign policy. I can’t find any information concerning his religious beliefs, but his Father was Jewish and his mother (a Christian) insisted that Dominic attended a C of E school. He is married with two children. This man has always been a passionate leaver and a real champion of the unfortunate. Like B.J., he
has suffered a great deal for his stand on the EU, during his early career his credentials were supressed for what is now obvious reasons. Now that there is a greater leaning towards leaving his true colours will come to light and we will see a man who is very capable indeed. He was the man who told Ollie Robins were he stood and that he had not been elected to office and reminded
Ollie Robins that O.R. was there in an advisory role.

This is one very passionate pro Brexit, pro No Deal Brexit campaigner. She stands by her word and has been outspoken on many issues. She is of Ugandan-Indian parents but born in England, she is 45 years old. She came into office in 2010 and was recognised as a potential firebrand from day one. She is currently serving on 5 committees and has served in 3 public offices. She is so pro-Israel that it cost her, her job. She resigned as International Development minister in November 2017 over 12 undisclosed meetings with Israeli officials that breached diplomatic protocol. There is little doubt that this was a politically motivated act on the part of the government because she committed this so-called “lack of precision” whilst on holiday, having paid for the trip from her own pocket. Priti is a long-standing supporter of Israel and a former vice-chairman of CFI (Conservative Friends of Israel). She has made her mark by declaring moves towards stronger border controls and has already stepped up the immigration laws. In fact, she is an advocate of very strong laws in general, it was her who has
founded a move to re-introduce the death penalty. Patel has been married to Alex Sawyer since 2004 they have no children. I have been unable to find details of her religious beliefs.

He is 47 years old, married with two children. He is another man who came on the scene in 2010. His father was a trade union official. He is pro Brexit, pro No Deal Brexit. He is to fill the shoes of such likes as David Davies in the role he is carrying out and he is more than capable of doing so. He is very tenacious and is clearly a survivor. The EU doesn’t trouble this man. He has held a senior role in Barclays bank as head of anti-money laundering a role that more than equips him to see through lies.
He has also held high office in government on no less than four occasions as Assistant Whip (HM Treasury) Lord Commissioner (HM Treasury) (Whip) Economic Secretary (HM Treasury) Minister of State (Department of Health and Social Care) and is currently serving on the public accounts committee. This man is no lightweight. He is ex-army (Lieutenant) he was educated at Cambridge and is a qualified solicitor. He is one of the few who remained in office after the shuffle and he has been there since November last year.


Chancellor of the Duchy of Lancaster is Rt Hon Micheal Gove MP.

He is 62 years old, married with two children. He was born in Edinburgh but raised in Aberdeen. He is known to have said that he is a “Christian and proud of it!” Sadly, he is more known for his stand against B.J. after the referendum, we can only assume that this has been swept under the carpet since he is still in office, and one of the few to remain after the clear out. He is border line on No Deal Brexit but can be persuaded and will adapt as the position unfurls. His role is largely as an advisor because as chancellor of the duchy of Lancaster he is advisor to the Queen and is in effect there on her behalf. He was educated at Oxford. He was a journalist in Aberdeen before moving on to the Times in 1996. He has served on two parliamentary committees and in six public offices including Shadow Minister (Communities and Local Government) (Housing and Planning), Shadow Secretary of State (Children, Schools and Families), Secretary of State for Education, Parliamentary Secretary to the Treasury and Chief Whip. Lord Chancellor and Secretary of State for Justice, Secretary of State for Environment, Food and Rural Affairs. Again, this man is no lightweight and is more than
capable of advising and steering the whole process in the right way.


More will be added in due course. The amount of research to get this far is very high indeed and if written out it would detract from the focus needed to pray for each person. I will build up a larger picture as the days go on. I would stress however, that our failure here would be their failure in office. We have prayed them in now let us pray them on and back them in constant prayer.
Please can I encourage you to familiarise yourself with each person and ask God to reveal how you should pray for them

This is at last becoming a reality, but huge moves have to be carried out to convince people to feel as confident as the cabinet do. Sadly, the other factor that has emerged has been that T.M. laid a minefield of obstacles to prevent such an event, including frightening folk into thinking that it would be a bad move. Phillip Hammond withheld the cash and all these matters have to be prayed for.